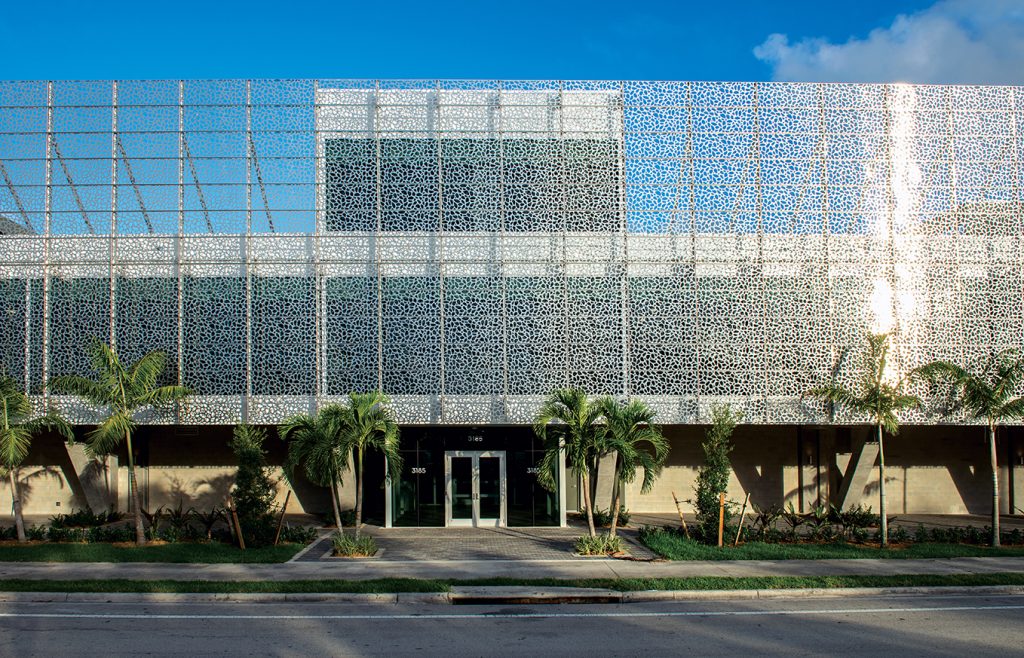 Every test of teamwork went into the construction of Kaufman Lynn Construction’s new National Headquarters. The project team had a construction schedule of 9 months to build the new Delray Beach office while simultaneously constructing a neighboring 132,000 s.f. CubeSmart Self Storage facility.

Early in the development process, Lead Business Developer Carlos Lorenzo worked with the City of Delray Beach to gain their approval of the joint development. Project Executive Chris Long was Project Manager Nate Coker’s mentor and provided support throughout the course of the project. Chris was not only a key team member in resolving issues, but was essentially the owner’s rep who communicated any important daily reports to KL President & CEO Mike Kaufman. As Project Manager, Nate Coker steered the project and navigated challenges and time constraints to deliver the new office building on schedule. His leadership and focus were vital in making this project a complete success.

Construction of the offices was essentially split into two phases: The shell was completed with one architect and the finishes with another architect. Finish Superintendent Carl Harper joined the team in May, taking on the day-to-day finish operations. Carl’s main objective was to bring the interior buildout past the finish line. Carl was vital in assuring the success of the shell and self-storage facility because his committed work gave Site Superintendent Chase Sammons the availability to check in and assist on the finishes, envelop completion, and CubeSmart project completion. Site Superintendent Chase Sammons was intimately involved in the construction of the building shell and envelop and oversaw Carl along with the shell work. With both projects under construction, completion dates were scheduled only weeks apart. Chase and Carl’s teamwork helped streamline the pace of milestone tasks for both the KL National Headquarters and CubeSmart Self Storage projects to meet those deadlines.

Project Engineer Garrison Salters took over the tasks such as final permit revisions and closely following fire inspection requirements that required a large amount of invested time to permit Nate to focus more on overall supervision of the project, finishing things out, and completing higher level objectives. As the project neared completion, Garrison was able to take things off Nate’s plate to focus on permits and CO requirements.

Project Accountant Mindy Morris was an invaluable part of the team. With the team essentially working on two projects at once, Mindy helped Nate grow along with the added responsibility. There were separate pay apps and invoices between the two, which Mindy expertly handled.

One of the largest hurdles the team had to overcome was schedule coupled with budget as the Boca Raton based KL associates were slated to move in by mid-October. The team also recognized early on the importance of maintaining the formality and a clear outline of responsibility upheld in every owner-contractor business relationship. Even with our own company as the owner, formality was key and the team acknowledged that absolutely everything was to be as regimented as any other KL operation.

Procuring materials after Hurricane Irma was a challenge, particularly regarding the façade screen. It involved extensive communication and calculation to get everyone on the same page and attain the façade screen from Colombia. The team had to move proactively in talks with the city a month in advance, addressing the circumstances with the building department and planning & zoning. They addressed what needed to be put in place during the TCO phase to get the project completed, such as having MOT and the sidewalk closed to ensure safe installation. The office was ultimately a Fast Track project because they permitted and started construction for the shell before the interior design was complete.

Each individual on the team from Chris Long to Mindy Morris, drove every inch of progress. Whether that meant Chase and Carl personally were mixing and pouring a concrete step that wasn’t in the drawings or Nate communicating with the city every day, each member of the KL National Headquarters project team took it upon themselves to do whatever it took to reach a successful completion.

We are humbled and honored to have been named 2020 Southeast Contractor of the Year by Engineering News-Record. This distinction stands as a testament to the entire KL team’s hard work and dedication to client success. Bolstered by strong demand for senior living and multifamily facilities in the firm’s home base of South Florida and an emerging presence with new branches across the peninsula in Naples, Fla., and in North Carolina, Kaufman Lynn’s Southeast revenue topped $480.8 million in 2019, a 73% jump from the previous year. The company’s expansion strategy also included a new branch in Austin, Texas.